cancel confirm NSFW Votes: (0 votes)
Are you the publisher? Claim or contact us about this channel.
0
Showing article 17 of 1756 in channel 8479958
Channel Details:
Viewing all articles
Browse latest Browse all 1756
0
0 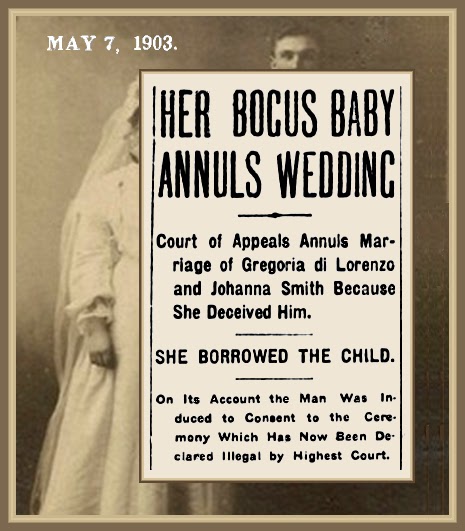 FULL TEXT: When Gregorio di Lorenzo of the Seventh Regiment Band discovered that Johanna Smith had imposed upon him with a borrowed baby in order to induce him to make her Mrs. di Loreno, he didn’t wait to have the matter settled after his death. Instead he sued to have his marriage to Johanna annulled on the ground that she had deceived him with a spurious baby.
The case was fought all through the courts Byron Traver conflicted his suit and Justice Calmer granted decree. But Edward appealed for Mrs. di Lorenzo to the Appellate Division and the learned Justices reversed the decree.
~◊~ She Demanded n Wedding ~◊~
The Big Trombone and Miss Smith first met in 1830. In 1891 they et up housekeeping in April 1901 the big band started on a long tour. When it returned in October, Johanna dandled a new baby before Gregoria and declared that they must be married right away He hesitated, she demanded.
“I was very much afraid of her,” he testified at the trial,” and so in November I married her.”
Nobody dreamed of trouble until she sued for a separation then for a divorce. His answer was this suit for an annulment.
Mrs. di Lorenzo admitted the deception but claimed that it was not such a deception as entitled Col. Appleton’s star tan-ta-ra man to an annulment and besides that they had been married by an Italian priest in 1900, shortly after they first met
The jury decided that the couple had not been married by a minister in 1890; that she had palmed off another woman’s baby only to induce him to marry her; that he married her because of this deception, and Mrs. dl Lorenzo never had a child of her own.
Justice Gaynor decided that this was legal ground for an annulment of the marriage The Appellate Division said it was not – thus the fraud perpetrated by Johanna upon Gregorio was not sufficient to warrant the Court in annulling their marriage.
Mr. Traver took the case to the Court of Appeals and today received transcript of its decision holding that Justice Gaynor was right and the Appellate Division wrong, and the trombone player’s marriage was annulled.
Judge Gray wrote the opinion of the Court of Appeals Chief Judge Parker and Judges Bartlett Martin Cullen and Werner concurring in a unanimous decision.
Judge Gray says that being established that di Lorenzo’s consent to marry Miss Smith having been obtained by fraudulent representations that a borrowed baby was her own is sufficient to warrant annulment of the contract of marriage between them.
The mother of the baby may now have it back if she wants it.
[“Bogus Baby Annuls Wedding - Court of Appeals Annuls Marriage of Gregoria di Lorenzo and Johanna Smith Because She Deceived Him - She Borrowed The Child - On its Account the Man Was Induced to Consent to the Ceremony Which Has Now Been Declaimed Illegal by Highest Court,” The World (New York, N.Y.), May 7, 1903, p. 3]
***
Viewing all articles
Browse latest Browse all 1756
More Pages to Explore .....
© 2022 //www.rssing.com