cancel confirm NSFW Votes: (0 votes)
Are you the publisher? Claim or contact us about this channel.
0
Showing article 16 of 1756 in channel 8479958
Channel Details:
Viewing all articles
Browse latest Browse all 1756
0
0 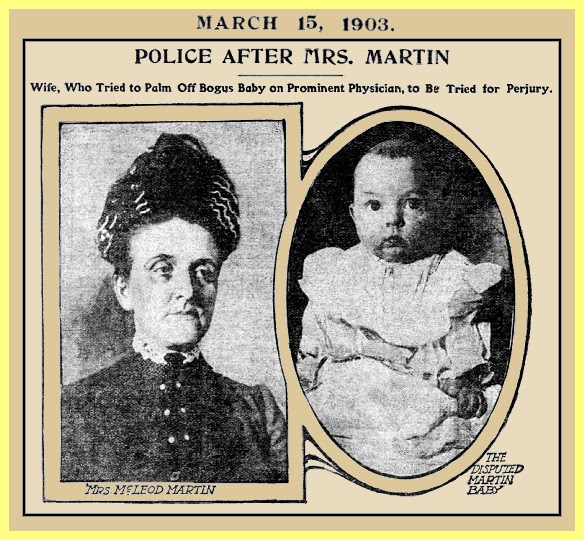 FULL TEXT: The New York police are after Mrs. McLeod Martin [Mrs. Elizabeth Starr Keefer Martin], wife of a prominent physician. She will be prosecuted for fraud. Last May she left her husband, and six months later notified him a baby had been born to her. The doctor denied the child was his. An interesting fight took place in the courts, with the baby as star exhibit.
During the trial public sympathy was strongly with Mrs. Martin. At its close a nurse confessed the child was spurious. Mrs. Martin is believed to have worked the deception in order to obtain dower rights on her husband's Scotch estates.
[“Police After Mrs. Martin Wife, Who Tried to Palm Off Bogus Baby on Prominent Physician, to Be Tried for Perjury.” The St. Paul Globe (Mn.), Mar. 15, 1903, p. 22]
***
Viewing all articles
Browse latest Browse all 1756
More Pages to Explore .....
© 2022 //www.rssing.com